CEC in The Hindu News

Recently I noticed, a few news on CEC have been published in the Hindu Daily. As of now, certain demands have come up for taking necessary measures to ensure that the achievements of the college and students should reach the public. In this competitive world, many other institutions are giving publicity for every small thing, and CEC never thinks on such so-called ‘cheap publicity’. But it’s time we gave some importance to the publicity, as achievements of our students and the college are not well propagated among the public. 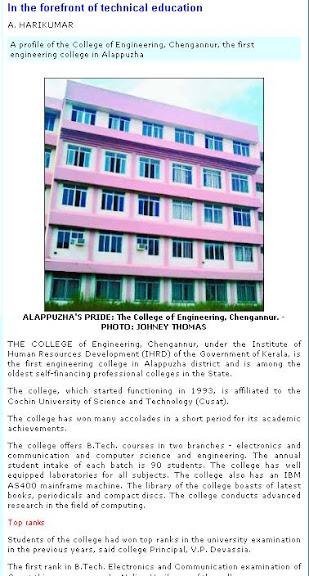 In the forefront of technical education

THE COLLEGE of Engineering, Chengannur, under the Institute of Human Resources Development (IHRD) of the Government of Kerala, is the first engineering college in Alappuzha district and is among the oldest self-financing professional colleges in the State.

The college, which started functioning in 1993, is affiliated to the Cochin University of Science and Technology (Cusat).

The college has won many accolades in a short period for its academic achievements.

The college offers B.Tech. courses in two branches – electronics and communication and computer science and engineering. The annual student intake of each batch is 90 students. The college has well equipped laboratories for all subjects. The college also has an IBM AS400 mainframe machine. The library of the college boasts of latest books, periodicals and compact discs. The college conducts advanced research in the field of computing.

Students of the college had won top ranks in the university examination in the previous years, said college Principal, V.P. Devassia.

The first rank in B.Tech. Electronics and Communication examination of Cusat this year was won by Nalina Hariharan of the college.

The college authorities encourage students to regularly participate in the various all-India competitions for engineering students.

According to Mr. Devassia, the students of the college had won many awards in the competitions.

They include top awards won in the Technopark-Institution of Electronic and Electrical Engineers (IEEE) product-designing contestin 1994, 1995 and 1997 and overall championship in the Paper Fest 2002 organised by Bharathiar University, Coimbatore.

The Larry K. Wilson Award-2005 of the IEEE for outstanding volunteer service was won by a student of the college.

It offers excellent placement services to the studentsand is ranked fourth among the various engineering colleges in the State regarding placement of students in various firms.

Nearly 60 per cent of the final year students was absorbed by leading firms through campus recruitment. The major companies that visited the campus last year for recruitment include Tata Consultancy Services, Infosys, Cognizant Technology Services, L&T Infotech and US Software.

The biennial three-day techno-cultural festival, Summit, attracts the attention of the engineering students in the State.

This year, the Summit would be held at Mammen Mappillai Hall, Kottayam on September 22, 23 and 25.

The Summit would feature two days of technical events and one day of cultural events.

The technical events feature talks and seminars on upcoming technologies and contests, which include hacking contest and online circuit designing.

The cultural events include debates, rock music and dance events.

And we have a few more news: